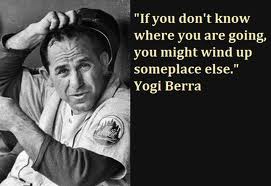 Yogi Berra, one of my favorite philosophers, once observed, “Predictions are difficult, especially when they are about the future.” Now that 2012 is in the past, let’s look back and see how I did with my Twelve-for-Twelve predictions.

1 Economy improves slowly – Hopeful signs in housing, jobs and consumer confidence
2 Meryl Streep wins an Oscar for her Margaret Thatcher role- A no brainer
3 Obama wins – Let’s hope gridlock gives way and Washington gets things done in 2013
4 Instability in Arab World – Frightening forecasts for 2013 & beyond
5 Weather is huge – Record cold in Europe; warm winter in US; severe droughts in US Mid-West; terrible flooding in Africa; unprecedented Super Storm Sandy. What does Mother Nature hold for 2013?
6 Red Sox fire Bobby Valentine- Another no brainer

Finally, either “Too Close to Call”, or “Above My Pay Grade” to judge: