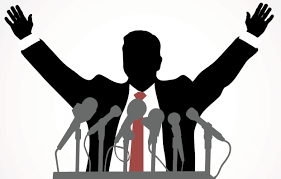 During Life Before Trump, or LBT, I used to offer personality type hypotheses on presidential candidates and make predictions based on them. This started when we were conducting our personality-based sales program, Successful Selling to Type (SST) way back in 1996 when Bill Clinton and Bob Dole were rival candidates. The first day of training happened to coincide with one of the debates and it was natural to apply personality typing principles to the two candidates. Clinton and Dole turned out to be polar opposites on the four Jungian scales popularized by the Myers Briggs Type Indicator (both SST and the MBTI are based on Jungian theory.)

Over the years, a trend started to emerge where the more Extraverted candidate prevailed. Not only did Bill Clinton defeat Bob Dole, George W. Bush was elected over Al Gore (my Democratic friends would point out that Gore had more popular votes), and Bush beat John Kerry.

In 2008, I was bold enough to make this prediction in a SST Newsletter:

My view is that Obama is more Extraverted than Hillary Clinton and thereby will win the Democratic nod. Of the three candidates, McCain — the most introverted — will stumble in debates against either Clinton or Obama, and lose. Remember, McCain lost the GOP nomination to the more Extraverted Bush in 2000.

I went on to offer this lament on Extraversion and Introversion:

While this kind of armchair analysis can be fun, it is also discouraging because Extraversion and Introversion (at least as Jung intended the terms and how we use them in SST) have nothing to do with competency, or in executing the duties as President of the United States. Indeed, Abraham Lincoln, considered by many to be the greatest president ever, seems clearly to have been introverted, at least based on my reading of Doris Kearns Goodwin’s Team of Rivals.

That was LBT and this is Life After Trump (LAT) and I have purposely steered away from any political commentary…until now. This time I will comment, not on arm chair analysis of personality types, but Daniel Kahneman’s (2011) principle of loss aversion.

Through a series of ingenious experiments Kahneman and his long-time research partner Amos Tversky, found that we suffer more pain when we lose something than pleasure when we experience a gain. When we apply the principle of loss aversion to politics, we can predict that the threat of taking something away will be fought harder than a proposal of gaining something new.

Thus, the key issue in 2020 will not be proposing a Green New Deal, Medicare for All or post-election health care that will be “beautiful.” These are all promises of gains.

Rather, the 2020 issue that will matter the most will be the loss aversion associated with repealing the Affordable Care Act. Nearly twenty million Americans have health insurance through the ACA. Now that is sure a lot of people. But, according to the US census clock in 2018, that only represents about six percent of the population.

While I can’t speak for others, you can sign me up to fight to save the ACA. I predict others will join the fight and that health care will be the defining issue in 2020. After all, I was right in 2008.