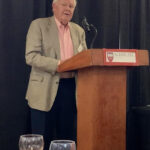 Recently, I had the honor of being a homecoming guest at Albright College. The room where the dinner was held happened to be the same one where I had the privilege of meeting Bill Russell many years ago. Needless to say, I had a flash back of that special moment.
At the time, I was advising student government and Russell was scheduled to be a speaker the following day. To accommodate rigorous study schedules, the council did not convene until 10 pm. Russel wandered into our meeting and I immediately rose to greet him. He asked about the purpose of the group and if they would mind if he just observed. The senators quickly consented and the legend sat with me in the back of the room. As I recall, he didn’t say a word, just periodically stroked his goatee.
When the meeting concluded, I told him the custom was now to eat pizza and shoot pool and asked if he would like to join us. Without hesitation, he asked who can say no to pizza and pool? I think it was the first time I heard what became his trade mark cackle laugh.
Of the articles I have read on his career, the one that I think revealed the most about his humility was by Jay King (The Athletic, July 31). King reports that Russell felt embarrassed by the prospect of a statue of him and didn’t grant permission until the Celtics agreed to help fund a mentoring program he supported. Sounds like the same guy I met who, although famous and revered, hung out with a bunch of college kids and their adviser at Albright College.
It is tempting for leaders, especially in the USA, to lose their humility and believe they, and they alone, are responsible for their organization’s success. They are not. It is how the followers on their team perform.
Be a humble leader and lead like Bill Russell and feel embarrassed by attempts to glorify you.

Post script: A version of this appeared in our community paper where the issue of a certain statue surfaces now and then. On statues Russell quipped: “Two things about statues. First, they remind me of tombstones. And second, they’re something for pigeons to crap on.”