↓
Home→Uncategorized→The Anti Christ of Selling: Back on Broadway 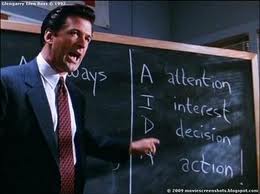 There are two classic plays on selling: Arthur Miller’s Death of a Salesman and David Mamet’s Glengarry GlenRoss. The former won the Pulitzer in 1949 and the latter won the same honor some thirty-five years later. Glengrarry will be back on Broadway this month featuring Al Pacino as Shelly “The Machine” Levene and Bobby Cannavale1 as Ricky Roma. Pacino also starred in the 1992 movie along with Alan Arkin, Alec Baldwin, Ed Harris, Jack Lemon and Kevin Spacey.

No, there is something about the drama of selling, the thrill of the hunt, and the exhilaration of a win that attracts story tellers like Miller and Mamet and actors like Pacino ( who now will appear in two Glengarry different roles, Ricky Roma in the film and as Shelly Levene in the Broadway revival).

For those of you unfamiliar with the story, it kicks off with Alec Baldwin’s character, Blake, reaming out the underperforming sales team (Arkin, Harris and Lemon while Roma grooms a mark in a bar). When using the film clip in training, I propose that Blake is actually the Anti-Christ of selling. With lots of profanity for emphasis, he says:

“I have come from another place – I am from downtown.”

“Mitch & Murray sent me to tell you what is important in this life – Get them to sign on the line which is dotted!”

“Now, go and do likelwise.”

With the background turning read – Blake exhorts, “Have you made your decision for Christ!”

Blake then turns to a blackboard to explain that selling is as easy as ABC:

The real key to selling success is still ABC. But, it is:

Now, go and do likewise.