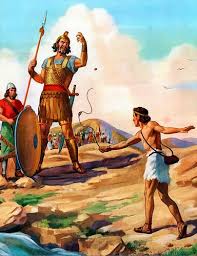 Malcolm Gladwell has now written four best-selling books: Tipping Point, Blink, Outliers and the recently released, David & Goliath. If you are unfamiliar with Gladwell, I commend him to you. His contribution is to capture interesting research and then relate it to practical applications through a series of human interest stories. On occasion, there are implications for business as there are in his 2005 Blink, which I reviewed in the precursor to this blog: https://www.tildensst.com/spring2005/blink2.htm.

David & Goliath holds some business lessons as well. Gladwell begins this work by retelling the familiar story of a mighty warrior (Goliath) who was felled by a young shepherd (David) who hit the giant right between the eyes with a stone he hurled from his sling.

Goliath and his army, the Philistines, were expecting the Israelites to send their best warrior to do hand-to-hand combat. When no one else stepped forward, David volunteered. But, rather than engage Goliath in a duel he would surely lose, David resorted to a strength and skill he developed protecting his flock: hurling rocks from a sling.

Gladwell writes about underdogs beating the odds with chapters on high achievers overcoming learning disabilities, successful adults who attended “mediocre” universities, and young basketball teams that won despite being short on talent and skill. In what some critics consider an over reach, he also extends the David & Goliath metaphor to the civil rights movement, Northern Ireland and class size. You can be the judge on that.

Back to the theme of this blog; business lessons that can be gleaned from Gladwell’s recent work.

In Rainmakers, Closers & Other Sales Myths, I write that, like war, winning business is waged at four levels: shareholders (sovereigns); CEOs & presidents (generals); sales managers (officers); and salespeople (soldiers). David was a soldier who engaged the enemy in battle. In the field of selling, it is the salesperson doing the direct combat.

The lesson is to think like David and consider all the angles that may lead to victory. Don’t engage a giant at his strength where you will surely lose. If your business competitor is big and dominates market share, don’t try to win there. Like Goliath, your competitor may be slow. Here, feature your flexibility and responsiveness to your customer.

Be like David. Size up your competitor and hit him where he is most vulnerable: right between the eyes.