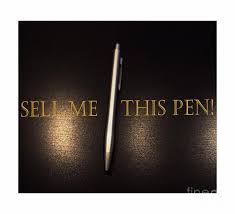 In the closing moments of Wolf of Wall Street, Jason Belfort, played by Leonardo DiCaprio, is introduced to a small group as the “world’s greatest sales trainer”. This title is newly minted as the one time Wolf of Wall Street is just out of prison after years of dishonesty and debauchery as a 1980s stock broker.

In this scene, DiCaprio approaches a front-and-center attendee, pulls a pen from his pocket, and demands, “Sell me this pen.” With little hesitation the pen-holder launches into the Features-Advantages & Benefits (FAB) of the pen. DiCaprio shakes his head in disapproval, takes the pen away, and hands it to another seated in the front row. We get the same result: a FAB pitch, disapproval by DiCaprio who then hands the pen to someone else. The movie ends.

But, the questions linger. Why was the world’s greatest sales trainer disapproving? What is a good answer to “Sell me this pen.”?

To paraphrase Alec Baldwin in GlenGarry Glen Ross, we are adding a little something new to this month’s blog. First prize for the best answers to those two questions is an inscribed copy of either, Rainmakers, Closers & Other Sales Myths or SST®:: Successful Selling to Type.

Second prize is a set of steak knives. And well, fans of GlenGarry Glen Ross know what third prize is.

The international panel of judges will be the real life Best Sales Trainers in the World: myself, Sweden’s Rolf Dackheden of Dackheden Consulting and Lithuania’s Kestutis Cvetkovas of Versse.(Both certified in SST®) and partner Harry Koolen of PfP Consulting.

Deadline for entries is May 1, 2014. Each submission will be critiqued and returned.