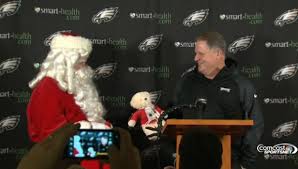 As a rule, I try not to contribute to the sports is a metaphor for life view. It is already oversubscribed. But, there is an exception to every rule and I am making one regarding recent coverage of Philadelphia Eagles coach Chip Kelly’s assertion that culture beats scheme.

A few definitions are in order. By culture, Kelly means getting players to pull together as a team and work toward a common goal. It entails putting self – recognition and individual statistics behind team accomplishments.

Scheme refers to the kind of offense and defense the coach selects. For Kelly, his offense is known as West Coast. It is fast paced with lots of passing and typically no huddle. While he had great success with this scheme at the college level, he faced skepticism in bringing it East to Philadelphia.

You may know that Eagle fans are notorious for once booing and throwing snow balls at Santa Claus during a half-time show (well, they were losing to the Vikings). They take their football seriously in Philadelphia as dramatized in the academy award nominated movie, Silver Linings Playbook.

One Philadelphia sports writer, Mile Sielski, draws a distinction between Kelly’s team first culture and that of the New York Jets and their coach Rex Ryan.

“Ryan talks a lot in public. So do his players. They are brash and outspoken., … But they lack the culture, the human infrastructure, to maintain success. They grasp for an identity. They court attention, it seems, for attention’s sake.”

Are there business lessons here? Certainly the businesses with whom I consult have competitors. One big difference is that they face them five days a week, not just on Sundays. They also have a scheme in place for selecting products and services that can be differentiated in the market place.

But, does culture beat scheme in business? Does the business that exhibits high levels of internal collaboration beat the one with silos and barriers to team work? Does your business do enough to build a culture of success by investing in its people? Or, is it trapped in one dimension of refining its scheme by researching and developing products?