↓
Home→Negotiation→Why Do We Talk Too Much? Answer: Food, Money, Sex 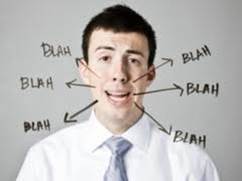 I have cited the work of Neil Rackham many times in my fifteen years of writing newsletters and now blogs. If you are familiar with it, please endure the summary that follows before I connect Rackham’s findings with something that recently appeared in the New York Times.

Rackham and his team were engaged by companies like GE and Xerox in the 1980s to determine what works in selling. The prevailing view at the time was that manipulative behaviors like closing techniques and handling objections were what led to sales success. Those practices were emphasized in training for new salespeople. However, executives at Xerox began to notice that, while new salespeople had success at transactional levels when they asked buyers if they would like their copiers delivered on a Wednesday or Thursday (the alternate close), they floundered when representing more complex solutions. Xerox turned to Rackham who had done some revealing research on what works in negotiations.

What was refreshing and still distinctive was the process Rackham employed. It is called Interaction Analysis and was pioneered in the educational psychology department at Temple University where I studied. Rackham’s research was based on direct observations of the interplay between salespeople and their clients. It wasn’t someone’s opinion of what they think, more appropriately “guessed”, worked. Regrettably, this kind of research is as scarce as a policy statement in a presidential debate.
What Rackham found was that manipulative techniques don’t work. In fact, the more a salesperson tried a closing technique the less likely it was for him to succeed. While Rackham’s research should have buried the practice and advocacy of closing methods many people in sales missed the funeral or didn’t read the obituary.

Well then, what worked in the sales process? Rackham’s core finding was that the most persuasive verbal behavior was the question. And, what does the question do? It focuses on the other person.
Despite the evidence, we still find too many salespeople, and I believe you can drop the “sales” prefix here and talk about people in general, stuck on talking about themselves, their products, their families and their trips.

Now, thanks to studies reported in the NYT done by a Harvard neuroscientist (Jason Mitchell) and a grad student there in psychology (Dana Tamir) we have a better understanding of why most people can’t stop carrying on about themselves. Their research revealed that talking about ourselves lights up the areas the brain “associated with food, money and sex.”

Clearly, that’s a trio that’s hard to beat. But, if you want to succeed in sales, you need to ask questions and listen. Thanks to Neil Rackham, we know this is the case.