↓
Home→Grit→Grit: Effort Counts Twice as Much

Way back when I was a young college administrator pursuing a degree in educational psychology, I was “nominated” by our academic dean to do a local validity study of SAT scores. Basically, this kind of study looks at how well the SAT1 predicts grade point average, or GPA as it is commonly known.
Surprisingly, I found that while the verbal SAT had a modest predictive value, the math SAT bore no statistical relation to the grades students earned. This was even true for students in Albright’s rigorous science curriculum. In other words, we may as well have chosen students based on eye color as their math SAT.

When we looked a little harder we found that the best predictor of college grades was rank in high school class. When you think about it, rank in class is determined not just by native talent, what the SAT professed to measure, but by what Woody Allen called “showing up”2: going to class, doing the homework, preparing for the exams and writing the papers.

Thus, at an early age I considered the relationships among talent 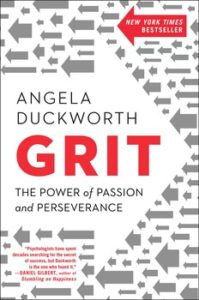 , perseverance and achievement. But, I lacked the passion and perseverance that Angela Duckworth has demonstrated leading up to her book, Grit, the Power of Passion and Perseverance (2016). The central premise of Grit is consistent with what we learned in the old study noted above: Talent is not enough to be successful. You may be the smartest kid in the class possessing the highest SATs, or the brightest person at work, but you must also show grit.

Indeed, Duckworth argues that, “Effort counts twice as much as talent.” (chapter three).
As a recovering academic, I sat through many commencement speeches, many of which had the same core message: Find what you are passionate about and then do it. According to Duckworth’s studies, the second ingredient of perseverance is what truly separates high performers. They display stamina and, like Duckworth herself, pursue their passion with consistency over time. As she writes, “Enthusiasm is common. Endurance is rare.” (p. 58).

When I lead a workshop as I recently did on my book, Rainmakers, Closers & Other Sales Myths, I emphasize the difference between talents (accidents of birth) and skills (can be taught, coached and learned). With this as a foundation, I make the pretend wager that if I could lead a team of salespeople with zero industry experience, but who had grit like talents, I would beat a team comprised of well experienced salespeople who lack grit. Thus far, no one would take the wager and lead the more experienced team.

Which leads us to the question, “If we agree that grit  is important, how do we know if someone has it?” Regrettably, Duckworth falls far short on assessing grit. While she offers a Grit Scale, there is nothing you would expect from an academic psychologist pertaining to its standardization, reliability or validity. It is very transparent and any candidate could easily fake that they had a lot of grit.The good news is that it shouldn’t be too difficult to design and then test some good behavioral interview questions to assess grit. In fact, there is a good start in my Recruit for Talent chapter in Rainmakers.

Duckworth’s research is not without its academic critics. Principal among them is psychologist Marcus Cede who asserts that grit is merely “old wine in new bottles.” The basis for his charge is that grit duplicates one of the long studied Big Five traits of conscientiousness which considers: organization, self – control and goal-directed behavior. This is an important point because conscientiousness is a native talent and Duckworth argues that grit is a skill that can be learned.

Notwithstanding the fair criticism by Cede, Grit is a worthwhile read reinforcing the common sense observation that talent alone is not enough. We have all known talented students, athletes and colleagues who fell far short of their potential. Eloquent in its simplicity is Duckworth’s quote: “Effort counts twice as much.”

1 Back then SAT stood for Scholastic Aptitude Test. Based on evidence that it wasn’t actually measuring a native aptitude, it was renamed by its publisher the Scholastic Ability Test.
2 Woody Allen observed that, “Eighty percent of success in life is showing up.”