Well, I set a record for time between blogs with the last post done way back in June. My only excuse is that I have been quite busy doing two weeks of training in late October in Sao Paulo, Brazil and having returned recently from a week in Vilnius, Lithuania. Although 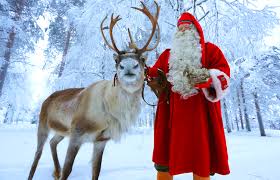 the climates are starkly different (warm and sunny in Brazil and cool and cloudy in Lithuania) the people in both places are similar being eager to learn about: smart client coverage, delivering winning presentations, skillful negotiations, selling to the C-Suite, the Strategy, Structure, People™ system and adaptable leadership.

This blog has its origins in the hard copy SST Newsletter that was launched back in 1997. At the time, I was pretty much a one-trick pony delivering SST sales training. Thus, the early newsletter topics had to do mostly with the application of Jungian personality concepts to business. Today, the same Jungian concepts enrich the negotiations, selling to the C-Suite and adaptable leader courses recently delivered.

This being the holiday season, I thought I would resurrect a SST classic from December 2002, Selling to Santa Claus. I hope you enjoy reading it as much as I did writing it 14 years ago and re-reading it just now. Happy Holidays, 2016!

Ever wonder about Santa Claus’ personality type? Me either, until I was scratching around for a newsletter topic that would be both holiday cheery and instructive. Let’s say you have reflected on the year 2002 and nothing in your behavior stands out as being particularly “nice”. What if all the “naughty” things you have done have actually been recorded through improved technology and reported to the North Pole? Naturally, you are concerned with how this will factor into gifts left under the tree, year-end bonuses or the like.
Fearing the humiliation of charcoal, you realize that you have to set upon an urgent SST strategy to persuade the jolly old one to come through for you. We begin with the Behavioral Cues exercise on page 29 in the SST Book. (It immediately occurs to you that the SST book would make a marvelous Christmas gift, only $17.84 with the holiday 15% discount).

Extraversion – Introversion
Is Santa an Extravert or Introvert? While our first image may be of kids sitting on his lap during the Christmas season, we cannot lose sight of how he spends most of his time and where he spends it. Nor can we ignore the rumors that many of the department store Santa’s are actually stand-ins for the real thing.

But for most of the year, could this guy be any further removed from other people than the North Pole? His work setting speaks loudly of one preferred by those with an Introverted orientation. Interruptions are controlled and he works closely with a small team of elves and reindeer. On balance, our SST hypothesis is that the rotund one is an Introvert who has become skilled at appearing jolly when he need to be.

Sensing – Intuition
Determining Santa’s type on this scale is a SST no – brainer. It is clear that anybody who works with his hands all day long, and has remained jolly for so many years, has to have a Sensing preference. This kind of daily regimen would drive an Intuitive type to talking with the reindeer about ways to perform Christmas tasks in a more contemporary fashion.
For example, an Intuitive type would never tolerate an arcane channel of distribution like a reindeer drawn sleigh in this age of electronic commerce. Claus has been doing things the same way for so long that it makes you wonder if he even has a strategic plan. No, this guy Santa Claus is a Sensor with a capital S.

Thinking – Feeling
Again, Santa’s preferences are abundantly clear here. His rewards are more psychic than tangible. They have to do with making children happy and not bottom line profit. Remember how he intervened in the Rudolph crisis and created harmony among the team? This is definitely Feeling oriented behavior.
A Thinking type, on the other hand, would apply cold logical analysis to the North Pole operation looking to itemize costs & benefits at every turn. Why elves? Are they as productive as non-elves? Are they a protected class, or could we open up the search and hire people who have the native talents to fit our performance criteria? Are these guys even evaluated?

It wouldn’t stop there. Logical performance driven questions would be raised about organizational structure (Who reports to whom here? Where does Mrs. Claus fit in?); the eight reindeer (What do they do the other 364 days of the year?); and the North Pole location (Wouldn’t another location be more economical and allow us to recruit staff other than elves and reindeer?).

Santa’s preference on this scale is very easy to read. He’s a Judger. After all, can you name a deadline bigger than December 25? No one with the Perceiving, “deadlines are made to be extended” orientation, would survive in Santa’s workshop. It is clear that Claus is comfortable in a work environment characterized by an emphasis on task management and timely delivery.

Our first clue that we have accurately typed Mr. Claus is that SFs are represented in the red quadrant of the SST logo, symbolic of their warm personalities. If Santa is not a SF, why does he wear a red suit?
As we read the full profile to plan our selling strategy, language like the following stands out:
“ISFJs are at their best when they are able to help others by providing practical forms of assistance. They tend to be sympathetic and kind. ISFJs are always meticulously organized and strong with details.”

Merry Christmas and, as my daughters would affirm, Santa actually prefers a cold beer on Christmas Eve rather than milk and cookies.