Obviously, I hit a nerve with my article titled, Death by Meetings? Try This. That article was viewed on Linkedin 17,111 times, liked by 9,233, re-shared 717 times and received 288 comments. By comparison, my previous article on Bad Management had 826 clicks and 9 likes. Since a picture is still worth a thousand words, the comparison is illustrated below. 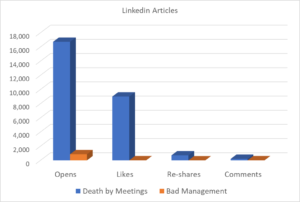 While the chart dwarfs the significance of the re-shares, they are likely accountable for the exponential boom for Death by Meetings. For example, the statistics show that it was opened by 683 CEOs. Smart team members follow what the boss is following and probably alerted others to read the article.
Another indication that re-shares account for the huge difference is that one of the leading geographical centers for opens was London. Now, as an American, I have been to London a few times, suffered at Heathrow several times, and have an English last name. But those factors are unlikely explanations for the readership there. More likely, an influential London CEO or two read the article and empathized with the cartoon caption, “We are going to keep holding meetings until we figure out why we are not getting any work done.”

But let’s not ignore the content of the article which offered two simple solutions to killer meetings: rubber chickens and poker chips. (Sorry, you’ll have to read the previous post to learn more on those two solutions.)
In keeping with the success of Death by Meetings I, here are more practical and simple remedies to really bad meetings in Death by Meetings II:

1 For God’s Sake – if you don’t need a meeting cancel it. Everyone will like you, at least until you call the next meeting.
2 Reader comments show that even more than regularly scheduled meetings, people just hate meetings to plan meetings and then meetings to review what happened at meetings. Avoid them. Or, have someone you truly don’t like convene them.
3 Management 101 calls for having a meeting agenda. It is appreciated by everyone, especially Introverts among us, if you send it out in advance. And, for God’ sake a second time, if you don’t have any meaningful content for the agenda, cancel the meeting. By the way, going around the table and having people report on what they did since the last meeting is not meaningful content. If most were candid, they would report, “I didn’t get much done because I spent most of my time in aimless meetings.”
4 On agendas, there are some elaborate templates out there for listing the purpose of the agenda item and providing a time estimate for each. If the meeting leader fulfilled these templates thoroughly, that is all he or she would be able do. This would only lend yet more credence to the commonly held view that managers waste their and everyone else’s time. But, minimally, there should be a purpose for every agenda item.
5 Many of the reader comments note the primary source for deathly meetings are leaders who don’t know how to run them. If you are a meeting convener, start by recognizing that most people in attendance don’t want to be there. Why? Because their time could be better spent elsewhere. The solution is to make the meeting productive so that attendees feel their time was well spent. That is the real challenge to being a meeting master.
6 Finally, in addition to the rubber chicken and poker chip solutions, it can help to have a process observer who can intervene whenever the meeting starts to wander and offer remedies like putting the topic in a “parking lot” to take up later. Meetings function on two levels, content and interpersonal and it is difficult for one person to monitor both. A rotating process leader can help considerably. (For more on this, and engaging Introverts at meetings contact me at [email protected])