↓
Home→Uncategorized→The Premortem – A Remedy to Groupthink 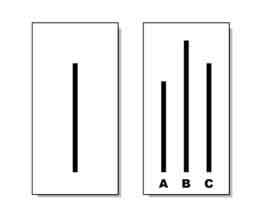 In 1951, Solomon Asch conducted one of the most famous experiments in social psychology. The experimental design was simple yet the impact of its findings on how we conform to social pressure has endured for nearly seven decades.

Ash arranged groups of seven Swarthmore College students to participate in an experiment where they were told the purpose was to assess their visual judgment. The catch was that six of the students were confederates and agreed to give obviously false answers about the lines illustrated above. The groups were asked, which line in the box on the right is most like the one on the left?

The one  subject of the experiment answered after six confederates had given wrong answers. Seventy-five percent of subjects conformed to the social pressure at least once in twelve trials and agreed with the obviously false answer. Think about it. Many, perhaps most, of us will deny what we see with our own eyes to go along with the group.

Another brilliant social psychologist, Daniel Kahneman1 brings us an exercise which he credits to Gary Klein. It is called the premortem and it can help combat the ill effects of groupthink. When a team is on the verge of an important decision, the leader invokes a premortem by saying, “Imagine we are a year into the future. We implemented the plan as it now exists. The outcome was a disaster. Please take five minutes to write a brief history of that disaster.”

A bonus to the premortem is that it engages Introverts in the decision-making process by having the team write2, rather than talk about their histories. When the team is asked to contribute their views verbally the result is often Extraverts like me drowning out the Introverts on the team. As the saying goes, if you want to know what an Extavert is thinking all you have to do is wait. But, if you want to know what an Introvert is thinking you need to ask. And, when we do we are often rewarded with a depth of thinking that otherwise would have been lost while Extraverts fight for air time.

The beauty of the premortem is that both legitimatizes doubts and involves the Introverts on the team in the process. As Kahneman writes it can serve to surface threats that may have otherwise been missed.

Along with the previous two blogs on meetings, the premortem can be added to a leader’s tool box along with the rubber chicken and poker chips. But, you will have to check out those posts to learn more about them.

1 Thinking Fast & Slow, 2011, p.264
2 Brainstorming is another exercise where writing thoughts down before they are spoken engages Introverts in the process.