It has been a miserable winter here in central Pennsylvania. Early 2019 followed the pattern set in 2018 which was the wettest year in history. And 2018 was not a little wetter, it was way wetter. For our state, the National Weather Service reported 65 inches of precipitation last year compared to 45 inches for a normal year.

In February, the heavy precipitation turned to what is termed a “wintry mix.” This is a euphemism for everything possible that can fall from rain, to freezing rain, to sleet, to snow. A warm sunny day was followed by a frigid one where everything froze over making it difficult, not only for humans, but our dog to walk about. We needed to drive extra carefully around our neighborhood because herds of deer were commonly meandering on the cleared roads.

But the crack of a bat signals a sure sign of spring. Yes, spring training has started with baseball teams reporting to the warm weather of Florida and Arizona.I am a life-time New York Yankee fan, and as such celebrated spring training by opening a Christmas present titled, One Hundred Years, The New York Yankees. Thumbing through photos of Bronx Bomber legends like Ruth, Gehrig, DiMaggio, Berra, Mantle and now Jeter, I stopped to ponder the wisdom of one of my favorite philosophers: Yankee manager Casey Stengel. 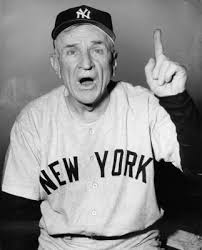 Known as the “Old Perfessor,” Stengel managed the Yankees to five consecutive World Series victories from 1949-1953. His over all record for twelve years at the Yankee helm was ten pennants and seven world series. Talk about a dynasty!

My mother loved recounting the story about Casey as a player returning to compete against the team that had traded him: The Brooklyn Dodgers. In his first trip to the plate, Casey doffed his hat and a bird flew out. Of course, Ebbets Field erupted in laughter at Casey’s antics.
Casey’s ramblings came to be known as “Stengelese.”But if you look at them closely there are a few pearls that offer important lessons for today’s leaders.

“The key to good management is keeping the nine guys who hate your guts away from the nine guys who are undecided.”
The lesson: Management is not a popularity contest. It is about beating the competition. As a left-handed batter himself, Casey had a much higher batting average against right handed pitchers. As a manager, Casey pioneered the platoon system where he altered the line-up from day-to-day depending on whether the Yankees were facing lefties or righties. Players who sat the bench complained. But despite the grumbles, platooning worked; just look at Casey’s record.

“Son, we would like to keep you around this season but we are going to try to win a pennant.”
The lesson: This supports the initial lesson from Casey: Leadership is not a popularity contest. Managers and coaches will tell you that the team with the better players almost always wins. It is more about surrounding yourself with talent than anything else.
If Casey were alive, he would tell you the difference between when he managed the cross-town New York Mets, who routinely finished last, and that of the Yankees was not his managing. It was the talent of the players. In fact, as he looked up and down the Mets bench, he once asked, “Can’t anybody here play this game?”

“Managing is about getting paid for home runs someone else hits.”
The lesson: Leadership is not doing it yourself. It is about influencing others to perform at their highest levels. It is fairly common for us to see a high performing salesperson (substitute teacher or nurse) promoted to a management position where they try to hit home runs like they used to. That’s not leadership.

“I got players with bad watches. They can’t tell midnight from noon.”
The lesson: Don’t confuse activity with accomplishment. Some of your top performers may have watches that don’t work well.

“They say some of my stars drink whiskey. But I have found that those who drink milk shakes don’t win many games.”
The lesson: I will let this one speak for itself.