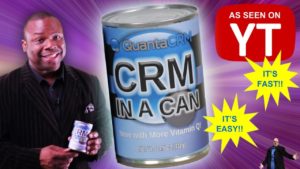 In 2007, I published a book titled Rainmakers, Closers & Other Sales Myths. The central premise was that too many organizations turn to one of four myths (Schmooze & Field of Dreams being the other two) to develop their businesses. They abandon the systematic approach they applied in building their core competencies whether they be in manufacturing, IT, financial services or professions like accounting and architecture. Not only is this phenomenon true across industries, it can be found regardless of size or geographic region.

I dedicated the last chapter in that 2007 effort to what I saw evolving as the fifth myth: CRM. Back then, I cite a Financial Times article estimating that “fully eighty-percent of CRM projects fail.”
By one measure things have gotten worse over the last twelve years. A recent article in Harvard Business Review (December, 208) estimates that CRM failure rates are now closer to ninety-percent.

The central reason for the failure is the same as it was in 2007. Firms see a fast and easy solution (CRM in a Can!) in automation without defining the underlying sales process. As I wrote back then, “Without a sales process in place, there is really nothing to automate other than flaws.”

According to a report by Gartner, CRM became the leading software expenditure in 2017 at $39.5 billion. Let me allow these two points to sink in: one, Companies are spending $39.5 billion annually on CRM; and two, ninety-percent of CRM systems fail!

It must be that constructing an underlying sales system is really hard and expensive. I assure you that neither is the case. But first, it requires a fundamental, but often absent, recognition that here are two kinds of sales: commodity and consultative. The former is simple and straight forward and involves “work hard” behaviors like knocking on doors and asking for the sale. The latter is major and complex and characterized by significant “work smart” milestones to achieve success. Winning a consultative sale can involve many people and take many months, even years.

It is the determination of consultative milestones, that satisfy the dual criteria of being both tangible and important, that comprise the sales process. Procedure is crucial here because without involving salespeople themselves in determining milestones the project is doomed to fail. Often salespeople fight CRM because it is viewed as something that is done to them rather than for them.
A good estimate is that CRM activities will take salespeople 1.5 hours per day recording notes from calls, updating contacts, entering expenses, etc. This works out to around 30 hours per month that a salesperson spends on CRM. Salespeople must perceive they will get a return from that investment of their time or they will simply feed garbage in and the old GIGO axiom will prevail: garbage in garbage out.

Finally, carefully defining the sales process and involving salespeople still will not ensure that CRM will result in more sales. This, of course, is because computers cannot build business relationships. Only skilled salespeople can do that. Once again, soft skills make a hard difference.