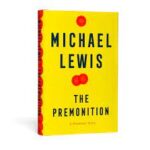 I am a fan of Michael Lewis and would concur with John Williams’ comment that appears on the cover of Lewis’ most recent book, The Premonition: A Pandemic Story (2021):

I met Lewis in London when we were seated together at a conference for a Wall Street investment bank. He was scheduled to be the after-dinner speaker, and spent the entire meal, not eating or conversing, but studying a binder. I thought this guy would be the worst speaker ever. Instead, he carried his binder to the podium, never touched it again, and told stories about wild Wall Street behavior recounted in his book, Liars Poker (1989). The audience roared with approval.

That is what Michael Lewis does: he tells spell-binding stories. Likely, Lewis the writer is less well known than the three movies based on his books: Moneyball (2003); Blindside (2006); and The Big Short (2010). Over the years, I have made several references in this blog to Lewis’ Undoing Project (2017). That book introduced me to the influential work of psychologists Robert Tversky and Daniel Kahneman, captured in the latter’s seminal Thinking Fast & Slow.

Which brings us to Lewis’ most recent contribution that deals with the all-consuming issue of our time: the COVID 19 pandemic. Lewis begins with the story of how George W. Bush was handed John Barry’s The Great Influenza about the 1918 Spanish Flu. If a pandemic hit, and there was a shared premonition that it would, Bush did not want to be unprepared. He ordered a plan to deal with a pandemic.

The story (p. 152) that sticks out to this reader is about a 74- year-old woman who spoke no English and checked into a San Francisco hospital with a fever and “feeling shaky.” She is given medications to treat a urinary tract infection and sent home. Three weeks later she checks into another hospital still with a fever, but she has now lost her vision. The hospital responds by throwing expensive drugs at the disease that has never been accurately diagnosed. None of the drugs worked. She dies with a bill totaling $1,000,100.

This is my main take-away from Michael Lewis’ fine story telling. I am confident you will find your own in what should be sub-titled titled Pandemic Stories. Whichever story sticks, you will likely be haunted by this question Charity Dean raises (p.279):
“Why doesn’t the United States have the institutions it needs to save itself?“

1 Space does not permit comment on other heroes like Richard Hatchett and Carter Mecher. Like all good stories, there are plenty of villains to go around.